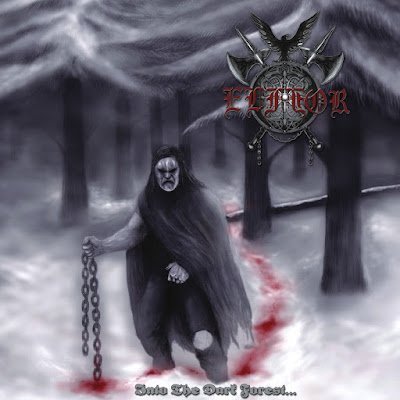 You race against the wind on your swift steed, faster than reason and without a moment’s pause, but still you do not know if you’ll make it in time to warn the city of the approaching horde.  Sword at your side, grim-faced and determined, you vow that any who seek to slow your mission will never get the chance before your blade meets their neck, and you will not even lose a step.  But as the shroud of night descends, leaving only the stars illuminate your path, you are forced to slow your course as you navigate the tangled edge of the haunted forest.  Without cutting directly through those cursed woods you would have no hope of arriving before the city is reduced to smoldering rubble.  Knowing you'll be met with dire forces of supernatural malice within, but steeling yourself and pressing forward, confident that even such eldritch power will cripple against your cold resolve.  With no path fit for riding, you dismount your horse and send him on his way as you turn to charge into blackness.

Elffor is a legend of dungeon synth, and one of the few that can be said to have continually carried the torch since the early days, and always with consistent quality of craftsmanship and uncompromising spirit.  Into the Dark Forest... came out in 1998, and even for a first output so far back had already found his voice and a relatively high standard of production that has been held to ever since.  However it is the only Elffor album that could’ve been considered pure dungeon synth, at least until after the resurgence with his Dra Sad series.  The intermediate albums incorporated much more black metal elements.  Black metal vocals are thoroughly present in this album as well, though no electric guitars or blastbeats are to be heard.  The vocals might be a turn-off for many listeners, especially those who are not also black metal adherents, but I appreciate that aspect about them.  Even though I do think it might be a better listening experience without the vocals, I respect the strict declaration of this still being fundamentally a black metal vision, not just some fantasy soundtrack stuff.  It imparts the sense that this is serious business, or at least that the artist is very serious about this work.  Probably outsiders might hear these vocals and see the cover art and think it all the more comical, but with that attitude it can only ever be partially appreciated at a distance.  By design such listeners are not granted the full experience.

But that’s not to say it’s abrasive or unapproachable, in fact I feel like there was conscious effort to make this as accessible for the target audience as possible.  This is not one of those records which the listener has to fill in the blanks with their own imaginative wanderings to have a substantial experience.  Unlike most dungeon synth this is not just background music.  It’s directly-engaging.  All the action is right there in the foreground.

The mood rarely strays from a sense of the epic or majestic, and yet manages to stay interesting throughout, even on repeated listens.  New riffs and textures are consistently being introduced.  Beyond the orchestral rompler sounds we all know and love there is extensive use of subtle pads, wind, and thunderish noises in the background, which might go unnoticed but do a great job filling out the mix and keeping it subconsciously interesting, often moving and changing, and without ever drawing attention away from the actual music.  The overall sound is as classic as can be, but executed with such a high level of compositional detail and structural development that I think the only albums from this time period that are really comparable in those terms would be Wongraven – Fjelltronen and Mortiis – The Stargate.

Though the mood of grandiose majesty is always primary, there is a contrast between feelings of meditative wandering and a sense of exhilarated urgency.  That latter mood gives this album an energy that is often lacking in the genre, one of the reasons why I think it does a good job actively bringing the listener into this fantastical world.  I believe it is considered a classic by pretty much all who are familiar with the foundational dungeon synth works, but still seems like it isn’t quite as well-known as it deserves.  I don’t see it discussed nearly as often as some other significantly lower-effort works of the late 90s.  Perhaps this is due to the fact that Elffor has such a large discography of similar albums, this one just tends to be overlooked as another like his most recent, but to my ears there is a special magic here, that mysterious authentic feeling only truly found in material from decades past.