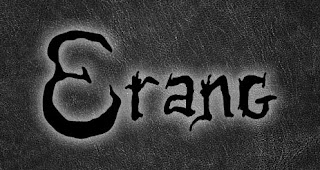 Andrew: First off, what is the meaning behind the name Erang, if there is any?


Erang: Erang has a very personal meaning. It is a person, a lonely person from a long forgotten past and I tell his story through my music. But it is a place as well. A kingdom from my childhood that nobody knows and where I will probably never go back.

Andrew: What country do you live in?  And would you say that your locality has any significant impact on your music?


Erang: At the end of the day, I am just a normal guy so I don’t really want to give details about myself. I don’t want to seem aloof but I think it is better to keep some secrets when it comes to music, especially with Dungeon Synth :  it is never good to know what is hidden behind the magician curtain.
About my locality, again, I don’t think it has any importance nor impact on my music. Of course, it gave me a certain kind of culture, feelings and tools or comfort to create... But when it comes to Erang, my country is in my mind and my land is my imagination. I don’t want to deal with reality...


Erang: My influences are numerous and varied. In every style there are artists, tracks or songs that I love. I would like to add that I don’t come from Black Metal, even though I very much like a few tracks and artists in this genre as well. My first inspiration to make Erang music really came from the cheap sound of old synth. I love it. It reminds me of old computer or rpg games. I've never been an hardcore gamer and I don’t play anymore today but, again, it strongly deals with nostalgia : the RPG and video games I played in my early years stuck their sound in my head. Then, I discovered few years ago the "ambient" albums and tracks from Burzum (note that I am completely against his political ideologies) and after that, Mortiis era 1. It really gave me the impulse to try to create my own musical world, my own spell...

Andrew: That's very interesting that you had not come from black metal but dove straight into this dungeon style of music.  You say the sound of the cheap old synth was one of your primary drives to create in this style?  Could you tell us anything about what kind of synthesizer(s) you use, or might that also be revealing a bit too much of the magician's craft?


Erang: I use software : a very old and simple one. And my sounds come from every kind of source, as far as I like it. But you are right :  I prefer not to get into technical comment about Dungeon Synth, because it is more about feelings and this is why I like it so much…  To me, it is like “Naive art” in painting : raw and sincere.

Andrew: This theme of hopeless nostalgia, as you mention, attempting to invoke the "kingdom of one's childhood," even though it is almost entirely unattainable, it seems to be a common theme in dungeon synth.  Even though you stated that it's a personal thing for you, do you think that this sense of yearning for what was lost is an intrinsic aspect of this type of music?  Do you get the same feeling when you listen to other artists who make dungeon synth?


Erang: I could not speak about the motivation of other Dungeon Synth artists but definitely I get the same feeling when I listen to the ones I like. In the past, I used to try to listen to lots of music in all genres, always trying to find a new sound to listen to or new experimental artists… just to arrive at the point where I thought : I’m fed up with the art dictatorship of “You have to be modern”... and then I found Dungeon Synth. Now, I just want to be moved by a simple single note of an old synth and feel the music on an emotional level rather than an intellectual one. Approaching art like a child : this is why I feel strongly connected with naive art, just to name it, and amateurish production. Everything around us, in our everyday life, is “ultraprofessionalized” and industrialized. Of course, I don’t want to live (and I couldn’t)  by candlelight and hunting but, at least in art, I need amateurish, handcrafted and sincere sounds. Fuck the music industry.

Andrew: What do you think the balance is between making music for yourself opposed to the audience.  Is the kind of art which is made solely for the artist and released as an afterthought, if at all, somehow more "pure" and "true"?  Do you think you'd continue with Erang if you knew that it would never have very many listeners?


Erang: As far as I release my music and share it with people, I care about their opinion. But not in a way that I would change anything in my music just to please the audience. But every time I get positive feedback from people about my music, it makes me want to carry on to share it and try to reach a lot of people, without compromising myself. I don't want to be famous or have huge amount of money (if that was the case, I will have done another genre than dungeon synth, haha) but I want to share my music with the maximum of people which are interested in this genre and universe. It is a way to communicate my feelings and fantasy... But if nobody were listening to my stuff, I will still do it them just for myself !

Andrew: Are you a spiritual person, any dabbling in religion or the occult?  And do you believe there is anything beyond "conventional reality" that we might have access to, such as an afterlife?


Erang: Wow, it is difficult to answer without being too long... I'll try to do it as short as I can and not being boring. First, I think that spirituality and religion are two things completely separate, in my opinion. Religion is just a human invention, like the wheel. It is a tool and it depends on random historical, geographical and political events. All religions could have been completely different, depends on so many different situations and events that happened in the past. So, in my opinion, it is strange to believe in religions and follow their rules. But on the other hand, there is spirituality which is, to me, basically asking to ourselves this question "is there a reason why we are here and life exists or is it just biological randomness ?"... and I don't have the answer, like everybody. Indeed, I hope that we are more than just intelligent monkeys but I don't have any clue.
About anything beyond "conventional reality" I will answer, again : yes, my imagination. I strongly believe in imagination. To me, The worlds I create inside me are just as important as the food I need to survive.

Andrew: You just released a new album, which is quite fantastic, called "Tome II."  What are your feelings about this album, both in itself and in relation to your first?


Erang: Thanks for the compliment ! The idea of delivering “Tomes” came with the second album. I wanted it to be a bit darker. Also, I tried to draw a storyline between them both. But it is not an obvious scenario, with a track by track story, because I always try to leave blank and space for the listener to create his own fantasy. (the most attentive observers could notice that the “man with no face” in the cover front of the Tome II is the same as in the back cover of the Tome I)

Andrew: So far you've released these two albums through bandcamp, a resource that a quite a few other dungeon synth artists use as well.  Do you feel there are any downsides to this modern approach, or is it a godsend for such an unprofitable style of music?


Erang: Obviously, it is a great opportunity to make me able to share my music. Without computers and internet, I probably wouldn’t have been here, doing this interview and having listeners… On the other hand, I grew up with CD’s (and even vinyl of child stories when I was very young) so it is still important for me, now, to have a CD with booklet, artwork etc. when I really like a band. But I can't afford to release my music on CD… This is why I always try to create a nice artwork for the album, even if it is a jpeg file. And this is why, also, I don’t release my music for free : not to make money but I think that you are always more involved in something when it costs you, even a little (and it not only works for money : when, in life, you make an effort to get something, it often counts more for you, in my opinion). This way, I know that when someone download my music, it means that he sincerely likes it and not that he downloads it just to give it a quick listen and forget it in his mp3 folders... at least I hope, haha !

Andrew: What are the future plans for Erang?


Erang: I’m currently working on Tome III. Maybe it will be the end of the first trilogy and Erang will evolve… or maybe a Tome IV will follow… I don’t already know it, right now.
Besides, I’ve just recently rejoined a new netlabel : Katabaz Records. It is a familial label with a bunch of friends, DIY spirit. They have recently released “This Mortal Night”, an ambient album (with some Dungeon Synth aspect sometimes). Other things are coming soon and I guess they could please Dungeon Synth listeners (pure dungeon synth, epic dungeon synth and some other electronic projects as well, etc…)
Everything is in progress but it takes time (we all have “real” jobs). If you need any information or news, email us at : katabaz.records@gmail.com

Andrew: Thanks very much for your words here.  Do you have any closing thoughts?


Erang: I really and deeply want to thank the writer of this Dungeon Synth Blog for 2 reasons :
1/ Giving me a voice and supporting my work.
2/ Making me discover a lot of great Dungeon Synth artists !

And also, great thanks to all you people who follow my music : your feedback is my reward, really!


The albums of Erang can be streamed for free or purchased for $2 each here: http://erang.bandcamp.com/
Posted by Andrew Werdna at 4:29 PM