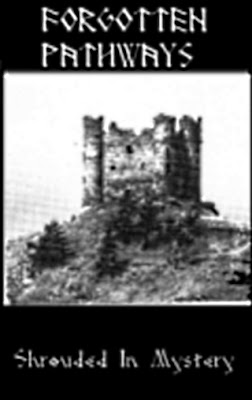 What have we lost of that mysterious other world? Where would we find ourselves if we took those forgotten pathways? Would only desolate crumbling monoliths be there to meet us, or will we find that the realm of Faerie still exists, but has simply been left behind by a mankind which has gotten lost in a forest much more menacing than any monster of the ancient fables?

Dungeon synth is an attempt to rediscover and walk these inner pathways, which might lead us into the mystical sacred realms somewhere in the collective unconscious, a place of nymphs and sorcery. Whether the artists of this genre are successful depends on whether they have assisted the lone listener with his explorations of the imagination. This is art not for the masses, but for those with the mind of a storyteller, those that can give atmospheric music genuine life with their mind's eye.

Here what we see is another rotting kingdom, functioning on some kind of order put in place long before, now grown quite weak. Forgotten Pathway's demo, Shrouded in Mystery only brings us to the point where we can see the misty twilight that marks the boundary between here and the elfish realm, and blurry in the distance, that fabled landscape itself. We can picture what was lost, what that fantastic realm might hold. And what it truly does hold we can never know because what we have lost is the mystery itself. Our gods, elves, and myths reside in the realm beyond, yet with no mysterious land behind the hill for us today, existence is more meaningless than ever. Most find satisfaction in truths we can objectively believe in, and that was the start of science, to find answers that we can trust for certain. Science ignores all that which can't be handled in objective testable forms, pretends that other states of consciousness and realms of existence are an illusory fluke of biological machinery, but living beings were not meant to live life objectively.

There is no ultimate truth. Science is failing us. Bring us back to the glorious dark ages, where God and gods were physically present in the skies, where other lands were alien planets, where dragons might be found nesting deep in the dark forests, and where the struggle for one's life was a daily quest rather than just a fantasy. This is what dungeon synth seeks to restore, even if just for a brief moment. Only in the most terrible decay and darkness of the inner landscape can we find the lost mystery, and art can only bring us there if it is an isolated journey with a mind embracing the degradation as the inherent quality of lost things.